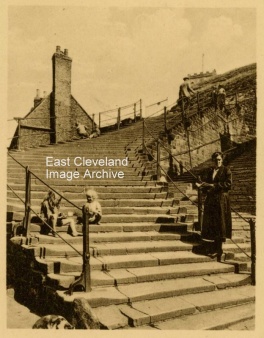 One of the most famous landmarks in Whitby are the 199 steps that lead up to St Mary’s church, also know as the ‘Church Steps’. The reasons for walking up the steps have differed over the years, but now they are used to capture one of the most beautiful views of Whitby you can achieve.

The first record of the steps was in 1340, though it is believed the steps were made a long time before this, as some historians believe that St Hilda would use the steps to test the faith of her followers (climbing up the steps would prove your faith, a simple task these days).

Believe it or not, the steps were actually originally made of wood and stood for hundreds of years that way until 1774 when the steps were replaced with Sneaton Stone. There has been many years of dispute as to how many steps there are, some believe there are 198, and others believe 200 (depending on how you count the steps). In 1761 John Wesley counted 191, and in 1800 guide books of Whitby 194 were counted.

Before the 19th century, when St Mary’s was still open for burials, many people preferred 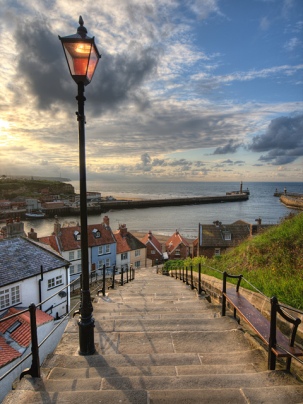 to be carried up the steps, rather than giving their relatives a more easy journey and having their bodies carried in a horse and carriage along Green Lane. It must have been extremely tiring carrying a body up 199 steps, so wooden planks were built in place to place the coffin on and give the pall-bearers a rest (they are now used as benches for the living to rest on). Though official pall-bearers weren’t always used; often men would be carried by their male companions, women would be carried up by female friends and family members, and children would be carried by children. For a long time the steps were an important part of the burial of Whitby folk, but now they are simply a pathway to a breathtaking view.